So, you listened to when we said how important online reviews were for SEO and you claimed your Google My Business and your Yelp profile. Congratulations! Now, you’re in the business of managing customer feedback. 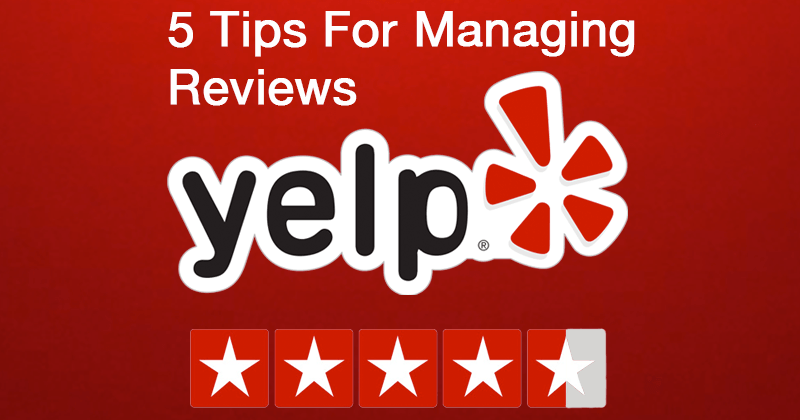 Below are five tips to make you more successful. But before that, first, I want you to understand how important Yelp really is if you’re a local business. Here’s some stats for you, courtesy of the Yelp Wikipedia page:

The number one rule (or issue depending on who you talk to) that makes Yelp stand apart from other review sites is that business owners are not allowed to ask for reviews. Yelp believes that asking for reviews, or offering incentives and prizes, will bias the reviews and Yelp’s ability to attract users is based on people believing the reviews are true. If you solicit reviews anyway, Yelp does have a way for customers to report your behaviour, so sooner or later, you’ll be caught. They also monitor for fake reviews, reviews bought through 3rd-party vendors, friends, family and employee-given reviews, so it’s best not to engage in any of the activities they tell you not to do. So how do you get great reviews? Keep reading.

Give Customers a Great Experience

Perhaps we’re stating the obvious here, and yes, we do recognize that not all customers treat companies with respect, and some complain to just complain, but it really is a new day. Issues with customers have the potential to reach a mass audience. Unhappy customers are more-likely to get online now and state their case, engage in revenge, and tell the world about their poor experience. We have some advice on how to respond within these tips, but the better the interaction with a customer in the first place, the less-likely you’ll need to engage in damage control. A couple of negative reviews among countless positive reviews does make all the reviews more credible, but if you have the reverse situation with more negative to positive, it will have a detrimental effect on your business. And believe it or not, if you give them a great experience, many people will go online to tell others about it. According to Yelp, most business average 4 or 5 stars, so that’s a lot of good reviews.

Although you’re not allowed to ask for reviews, Yelp does let you encourage — via their swag — honest reviews. For example, you can post one of their “Find us on Yelp” or Yelp QR code signs, stickers or badges (of course, it doesn’t hurt Yelp to have all that free advertising), which tells people you’re on Yelp and may influence them to give a review. You can also host a Yelp Event, which entails posting an exclusive Yelp-only event and inviting a bunch of Yelpers (yes, this is what they call people who are members of Yelp) to attend. You can also offer Yelp Deals, which give discounts for Yelpers to try your place over the competition (which of course encourages people to become Yelpers and helps Yelp). It’s no guarantee that you’ll get a positive review, or any review, but making yourself known within the Yelper community and delivering great services or products increases the likelihood you’ll get some positive reviews. You may ask yourself, what’s the difference between asking for a review on my own and encouraging a review via Yelp swag? Well, that’s a good question, but it’s their rules. So it’s best to play by them.

Turn a Negative Yelp Review Into a Positive

As we mentioned above, having a couple of negative reviews in a collection of positive reviews often helps you rather than hurts you. It just makes the reviews seem more credible. That doesn’t mean that if you get a negative review you should do nothing. So when you receive a negative review, take a breath. Don’t answer back with emotion, you’ll only make matters worse, especially if you sound defensive, snarky and so on. You end up looking worse than the reviewer. So take a breath. Try to see it from their perspective. Try to see it as a way to improve your business, perhaps it’s part of a pattern of negative reviews and unlike others who just won’t return, you’re being told of the issue and this is a chance to fix it. Don’t take it personally. Then decide if it should be answered back privately or publicly. Publicly has the benefit of counteracting the negative, not with name calling or anything like that, but acknowledging their complaint and perhaps responding with other more positive facts, for example, “We’re surprised that you experienced xxx, it’s one of our top sellers.” Admitting you made a mistake and offering to make it up can also go along way (although you wouldn’t want to encourage “prizes” for bad reviews). Humour about the situation (not the person) can also take the impact down a couple of notches, while also entertaining future readers (but be careful not to mock).

Although a Harvard study did find that in 2014 20% of the reviews were fake. Of course, just because a review is negative, doesn’t mean it’s fake. Having fake sounding positive reviews puts the credibility of all your reviews in jeopardy. And although we can’t imagine you wouldn’t read the reviews, it’s a good policy to always read your reviews. And whether it’s negative or positive, if the review is fake and goes against Yelp’s Guidelines, it’s best to report it.

To increase people trying your service or product, there’s also the option of advertising on Yelp. Although there is a lot of criticism about Yelp, there’s never been any correlation between Yelp removing negative reviews in exchange for ad spending. There’s been a few court cases and all were thrown out. Advertising on Yelp won’t get you positive reviews, but it will call attention to your product or offer and so it’s worthwhile to give it a try, if you treat it like any other form of online advertising.

Why Invest Time in Getting Online Reviews? SEO. SEO. SEO.

How to Use Online Reviews for Paid Search

Optimize for Local with Google My Business