Say Goodbye to Third-Party Cookies. Why Should We Care? 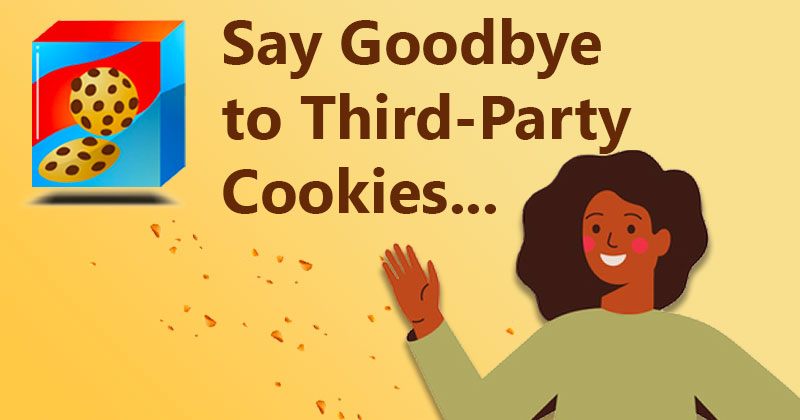 There’s an unwritten agreement in place between advertisers, publishers and consumers of content, whether that content is on TV, magazines or the web. That agreement is that we get to consume content for free (or cheaply) and in exchange, that content creation and publication is paid for by advertisers who want our attention. Consumers still want this agreement, they just think that the price they’re paying for free content is more than they bargained for. And this sentiment is what’s causing the death of third-party cookies.

In the first series of this blog post, we’re going to explore everything you ever needed to know about third-party cookies and why they’re disappearing.

What is a real-life example of third-party cookies in action?

Let’s say you visit an online clothing store and looked at jeans. Then you decide to comparison shop and opened up several tabs, and after searching several companies, you saw one pair of jeans that you liked, but decided they were a bit pricey so you would have to wait to purchase until next month and so closed your browser window. That browsing information still remains via a third-party cookie for all the websites you visited. Fairly soon after, you start to see ads for that specific pair of jeans all over the web, as well as the other pairs of jeans you looked at when you comparison shopped. Everywhere you go, these ads seem to follow you no matter what kind of content you’re looking at. This is known as retargeting. And the clothing companies you visited paid an ad tech company, who paid the websites you visited, to show you their ads for jeans.

This is an example of third-party cookies at work. It might seem harmless at first, but all that tracking can be connected and linked to third-party datasets on consumer indexes, demographics and addresses. The question of harm then depends on who you talk to, consumers says yes, companies say no. They believe personalized ads deliver a better and more relevant ad experience to people. The end result is that ad tech companies end up knowing more about what you like, what you do and who you are, then you may even understand about yourself. What happens to that info, and how it is used, is what led to the present situation we are in (more on that later).

First-party cookies are generally viewed favourably. They’re the cookies a website drops on your computer so that it can track your behaviour while on that specific website. First-party cookies allow websites to remember what info you might have filled out on a form, or what you had in your shopping basket, regardless of whether you’ve signed in or not. They also provide website owners with information on what works or doesn’t work on their site, what people like or don’t like on their site and so on. The end result is usually a better experience for people who visit their website.

Some companies, such as Google or Facebook however, will still track you with first-party cookies and serve personalized ads to you within their own properties. So for example, when Google decided to end third-party cookies within their Chrome browser, dealing a death blow to the third-party tracking ad tech industry, they faced lots of criticism since their main revenue streams of YouTube and Search won’t be impacted at all, as they use first-party tracking cookies to serve consumers personalized ads. And the impact to consumers who use these properties is still the same.

Unlike TV and magazines, whereby advertisers are choosing these properties based on generalized demographic and geographic information, the web has been tracking people individually. And although consumers understood the agreement regarding free content and advertising, it’s quite clear that they didn’t understand they were being tracked as individuals. Which, why would they? As most companies buried any information regarding their tracking in little black type before people accepted terms of use, or on little read privacy pages, and in legal language many people didn’t understand, and of course, if they did provide an option to get out of it, you might have to jump through a few hoops to succeed.

The Facebook-Cambridge Analytica scandal opened people’s eyes to what was happening. Interestingly, they didn’t actually use third-party cookies, but the realization that people could be manipulated as individuals (as opposed to a group) to win an election, and that ads you were seeing may be tailored specifically to your individual behaviour, well, this freaked people out. And although privacy issues on the web had been on some people’s radar for many years, it really hit the mainstream after that.

Since then, people and governments have become active when it comes to privacy and the web. Pew Research found that 72% of people think that they’re always being tracked online, and 81% say the costs and potential risks they face because of this individualized tracking outweighs any potential benefits. Some governments have released legislation protecting consumer privacy. The GDPR, the CPAA, are just the tip of the iceberg. Expect more legislation. And companies are also being forced to respond, Safari and Firefox already dropped third-party cookies. Google’s Chrome is phasing them out for 2023. Apple has turned itself into the company that cares about privacy. Ad tech companies such as Adroll that made their living off of retargeting, have developed contextual and content marketing strategies. And the race is on to develop other options that can let advertisers better target audiences and deliver personalized ads, without infringing on people’s privacy and tracking them all over the place. Google is in the lead with FLOC. But, we’ll speak more about these options in our second blog post in this series.

If you’ve been in advertising for a long time, you’ll likely have heard this quote from a business man, John Wanamaker, in the late 19th and early 20th century that many believe still rings true today.

Half the money I spend on advertising is wasted; the trouble is, I don’t know which half.

In many ways, advertising for a long time was a practice of faith. You picked ad space based on the demographic and geographic information available about that target audience. Sure, that information was based on collected facts, but you could never really know, because you could never real link in real-time that that advertising campaign caused that uptick in sales.

Third-party tracking changed that. It promised a more direct and simpler way to reach your target audience, and that target audience could get very specific. You don’t just advertise to women, over 40, who like clothing, but you can advertise specifically to women over 40, who have been browsing for brown purses in the last month. Third-party cookies also promised a more scientific approach to advertising rather than a matter of faith. You could analyze data and prove this campaign led to these sales.

The reality, of course, has been much different and third-party cookies haven’t been living up to their promise. For starters, people often clear their caches, so all that history contained in cookies would be lost every time they did. People also often share computers, and even click on ads accidentally. Then, of course, the fraudsters have gotten into the business, with ad bots all over the internet who fake ad traffic to increase ad revenue. I once watched a report in which companies, filled with iPads and no people, spent their days just clicking on ads. So, the data coming back has never been 100% accurate. In fact, typically, when it comes to cookie-synching, anything 60% or above is seen as a good match rate, and anything 40% and below is seen as poor match rate, but the average ability for cookies to be synched between ad tech platforms is somewhere in between these two percentages. Which, incidentally, is around the same percentage of accuracy John Wanamaker expected in the late 19th and early 20th century.

Even if it was only 40% to 60% accurate, third-party cookies certainly had its benefits. If you were a small company, that had a limited budget, but you could advertise to those who already came to your website, even if it’s 50% accurate, it would be far cheaper and more effective then to try to advertise to a generic category of people who, say, like fashion. It’s likely a small company won’t be able to afford to target such generic demographics, which is why, when Google announced they too would banish third-party cookies, people understood that smaller to mid-size companies would be hurt the most from this development.

What will be the impact of the death of third-party cookies?

The largest detrimental impact will be on small and mid-size companies, including smaller ad tech companies. Companies such as Google, Facebook, and LinkedIn may even increase their profits since they can deliver more scientifically sound and targeted advertising options that rely on first-party data tracked when you use their platforms.

Google, arguably the largest ad-tech company around, will experience a minimal impact on their revenue stream, since most of their revenues are generated through YouTube and Search. However, Google is at the forefront of charting another path away from third-party cookies, with their Privacy Sandbox and other innovations. How come? Google is first and foremost an ad business. Some of its business, even if it’s not their main revenue stream, does rely on third-party cookies spread over millions of websites. Relationships built over years of investment. They’re just not going to walk away from that business without a fight. And they will fight for that business with innovation.

In our next blog post, we’ll discuss the solutions that are currently at our fingertips (or within reach) as well as our two cents as to what you should do to prepare for this shift…

We keep up to the constant change in search so you don’t have to. Contact us today.