Your Tweets Just Got A Whole Lot Longer

Twitter has allowed the use of photos, videos and polls with their tweets for some time. But what you gained with vibrant imagery, you lost with a reduced character count. This month, that changed. 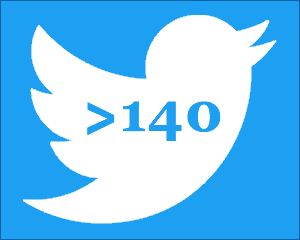 Twitter announced that videos, photos and polls will no longer count against the 140 character limit. And that’s good news for marketers and advertisers. Sure, we love the challenge of devising copy within 140 characters, but add an image and a hashtag and our canvas was getting small indeed.

We can’t get into the minds of the folks at Twitter, but if we harboured a guess, it became too challenging for a lot of users (and perhaps for Twitter advertisers) to write something meaningful within such a short character count – 140 characters was short enough.

Although a picture may be worth a 1000 words, the English language has a rich and robust vocabulary with over a million words, most of which are more than four letters long. With this change, marketers and advertisers can now go back to using some of them.