What do extended text ads mean to you?

I have a confession. I love writing search ads. As a recovered copywriter, I’m smitten by the challenge of communicating well in a 25-character headline followed by two 30-character descriptions lines. The satisfaction of writing a good one that’s measurably better than its predecessors has never diminished for me.

Years ago, a study showed that organic search results with longer title tags (which appear as blue and bolded hyperlinks) receive more clicks than those with shorter ones. At the time I wondered when Google would use this data to change the parameters of its paid ad copy. Wonder no more!

Now With 2 Headlines –  Get More Clicks With Your Extended Headline!

On July 26, Google announced it is changing the character counts allowed in its ads to two 30-character headlines and one 80-character line of descriptive text. 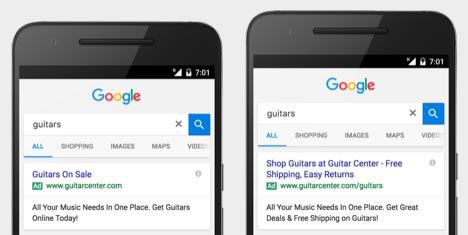 What’s Good for the PPC Goose….

When will your AdWords ads be updated?

As of October 26, you won’t be able to create the old-school ads anymore. For Search Warrant paid search advertising clients, we’re tackling your ad copy using the good old 80/20 rule to update your highest-performing ads first and then following up with the rest.

For more detail on the change, see what SearchEngineLand.com has to say. And if you have a question, I’m happy to take a break from furious copywriting to chat it out with you.